Emma, a volunteer from the UK, writes about creating a piece of art on one of our walls:

This time it was time for me to take a risk and step out of my comfort zone and try something new. I had wanted to play around with shapes and tessellation but also the concept of fragmentation and the whole. And so I ventured out and took on a wall with an idea and concept but no defined idea or finished product.

It was great to manage a complete wall single handedly without the help of others as a good way to test out my discipline. Having prepared the wall the day before it was time to take the leap and also to face the fear myself. To the average artist the notion of putting your art on the wall for public viewing and having the potential of it being rejected should not really be daunting but it has been a giant in my thinking for quite some time.

I started and the process seemed relatively plain sailing and then it came to putting paint onto the wall. I guess there was no going back form this point and I had to make this move sooner or later so it happened. As colour hit the walls it was a interesting transition from being afraid of rejection to being free to walk away and not caring too much if it came out ‘right’ or not. It was incredibly freeing to let the art just be what it is and not have to explain it and justify it.

And as I was merrily getting covered in paint two of the youth came over and wanted to discover something new. Without hesitation they joined in and I realised I had reached that point where I no longer cared about it being mine nor that it had to be of significance. It became a shared piece and experience. More than this though I realized I had built the relationships with some of the youth now that they no longer hesitate to talk to me and they don’t need encouragement to get involved. They had the confidence to step out with me and we had a relationship of trust and creativity. The final art piece was no longer the end goal.

And it’ s still a work in progress….. I’m not sure I am fully satisfied with the final outcome but I am happy to walk away and leave it be as it is. 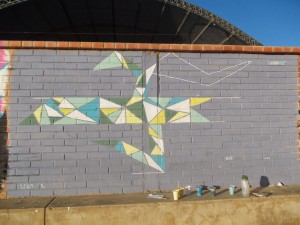 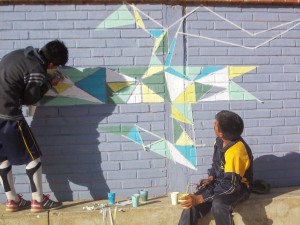