A group of ten Bolivian women, many of them dressed in traditional pleated skirts, lace blouses and wide-brimmed hats over plaited hair, crowd around a table covered in colourful knitted egg warmers. One of the ‘cholitas’ – as these indigenous women in distinctive garb are affectionately known – takes out a tape measure and checks that the gimmicky pieces of kitchen kit shaped like miniature bobble hats are exactly the right size. The women belong to Tantakuna, an artisanal cooperative in the community of Mineros San Juan on the outskirts of Cochabamba, and they have chosen to include the egg warmers in a catalogue they are compiling for Germany, a key export market, so the measurements need to be spot on. 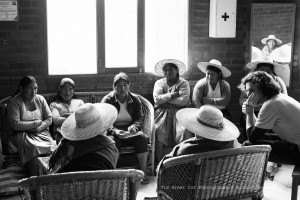 Proyecto Horizonte founded  Tantakuna – which means “to meet together” in the indigenous language of Quechua – in 2006 with the aim of helping the women earn money for their families while also giving them a circle of support in which they could share knowledge and friendship.

The group started exporting products such as keyrings, bracelets, scarves, placemats, cases for electronics and bags in 2011 and business has flourished since then. Last year the women sold almost 50 percent more products than in 2013 and while 2015 is proving to be a tougher year, the women are determined to find new foreign buyers for their goods.

They are currently seeking to hire a salesperson who can ratchet up their export ventures as they prioritise these over the highly competitive Bolivian market,

In addition, they have just finished making samples of an exclusive range of products for One World Shop, a fair trade organisation that sells handicrafts from around the world.

“The quality of the products has improved a lot over the last two years because the women are much more aware now of how the markets work and what clients demand so we feel we are ready for One World Shop now,” says Johan Börjesson, head of community relations at Proyecto Horizonte and an advisor to Tantakuna.

The women have been working hard to improve the consistency of their woven and knitted handicrafts so they can boost foreign sales.

“I used to say I could tell which women had made which products just by looking at them but that’s getting harder now,” Börjesson says.

What’s more, the group will probably get its formal business papers within the next two months – a step that would make it more independent of Proyecto Horizonte and more focussed on generating revenues than simply meeting together.

But it will seek to stay connected to its origins as a community of women. Each Tantakuna product sent overseas will come with a label featuring a photo of the woman who made it along with her name, date of birth and a short biography. The designs used for the handicrafts are all the women’s own and some of the traditional Bolivian symbols they use already come with explanations.

“That’s very important for us because as much as we’re selling a good product, we’re also selling Bolivian culture and the cause of Tantakuna,” Börjesson says.